UFO's I didn't realize that I had them

UFO (UnFinished Object) or my my favorite PHD (Projects Half Done) are what other quilters had but not me. Boy was I wrong. My husband had told me when I started quilting to not start one project until I had completed my current project. I thought that I had done a pretty good job at that until here recently. I have been doing some cleaning & rearranging in my sewing room & have discovered some PHD's & some projects that all of the fabric had been pulled & set aside but never done. So here's my goal " I want to get as many UFO's &. PHD's done as I possbily can this year". Here's my list with pictures!
#1. Friend Liz's quilt. The pattern is changing so this is still in the holding pattern.
#2. Kiddo's Military quilt. Last June I had gone to Missouri Star & found some military fabric in precuts & I knew my kiddo would love it. I bought it & was going to make his quilt in my Prairie Stones pattern. I finished all of the blocks yesterday & was able to lay it out last night. 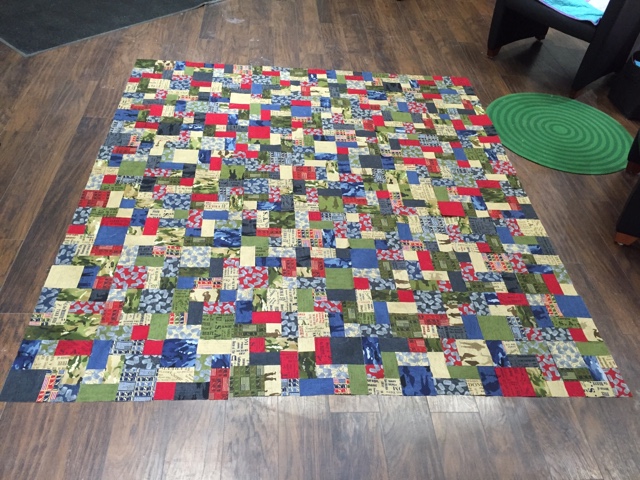 Now I just need to piece the blocks together & put the borders on & I'll be able to cross this one off of my list. I'm hoping that maybe I can give it to him for Valentines Day.
#3. The Double Wedding Ring. My mom got me the die & I had started on it but stopped because I was getting frustrated with it. I think that I'll have a better time with it now that I've had a bit more experience with set in seams, Y seams & sewing curves. There are lots of pieces started in the bag. 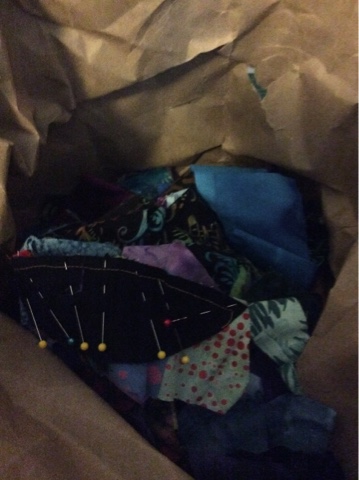 #4. Cream & Yellow quilt. Between the trip to Missouri Star in June & then again in September I picked up the fabric for this quilt. 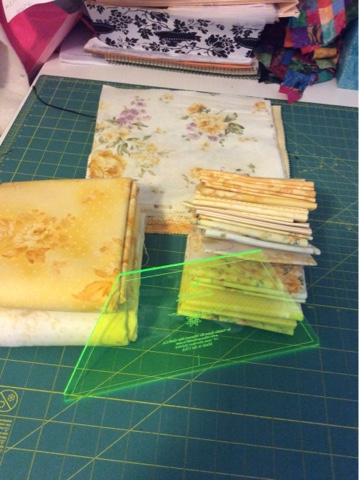 When I saw this fabric it's like there was tunnel vision & everything else was blurry. I made a bee line straight for it & it was coming home with me. This is a very strange phenomenon becasue I don't buy yardage I'm a scrappy girl. Anyways I think that the plan for this to make large hexagons so that you can see the beautiful fabrics.
#5 Wool appliqué quilt. This project started in August of last year when I took a wool appliqué class through my guild. I really enjoyed it but there was a problem, the project was designed to be a wall hanging. Nothing against wall hangings but they're just not for me. I wanted something big enough to use so I asked the designer if she had a way to make it bigger & she did & I'm thrilled. I've got 4 out of 12 blocks done. I cut out all of the remaining blocks last week. So now all I have to do is the handwork. 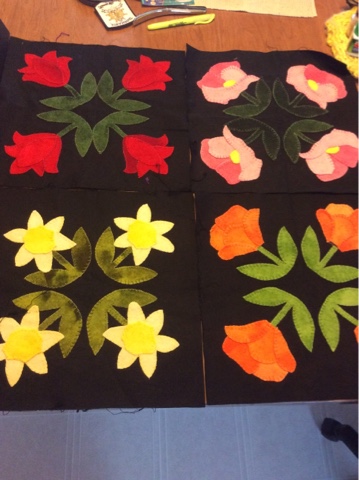 #6 Wild and Goosey
The is an insanely large quilt that is paper pieced. Each tiny block is 3.5" unfinished & I need to make a bazillion of them becasue you know me it's gotta be huge! 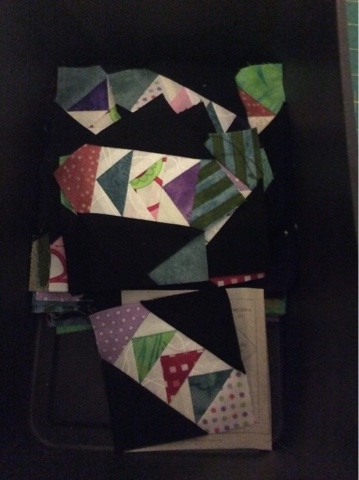 #7. Winding Ways. This is my current treadle project & it's kinda of sat on my treadle for a while. I know  that I need to cut more scraps for it but mainly I just need to sit down & work on it. 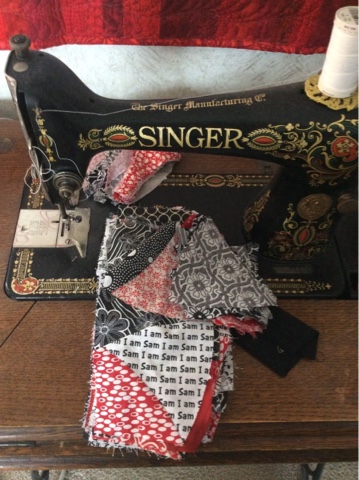 This is just a temporary list becasue I know I'll find more UFO's & PHD's & many more projects will be started.  I'd better cut this off & get supper going & do some sewing. I hope that y'all are having a great Saturday. More later on,
Vicky
Posted by Unknown at 2:03 PM 1 comment:

Sometimes you just know when a pattern has either kicked your behind, is beyond your capabilities or you've tried & failed multiple times & have failed. I think that I have found that pattern for me. My dear friend Liz asked me to make her a quilt over 3 years ago & it is still not made. This is the pattern she choose 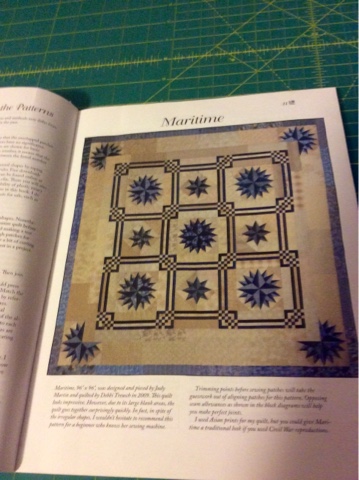 "Maritime" by Judy Martin. My first thought was this should be a piece of cake, boy was I wrong.
First I tried to make it according to the directions in the book & this is the block that I came up with. 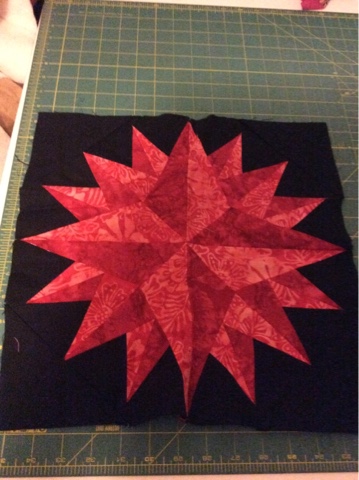 A very cool, very wavy block. This wasn't going to work. My next solution was to take it to a quilt shop that is know for their paper piecing & have them draft up a pattern for me. So I Ieft it there for about a year or so. They made no progress on it so I asked my friend Randi if she could draft it & make the star blocks for me. She drafted them for me & this past March or April I dug them out & thought that they would make a great project to work on while taking care of my father in law next door. Randi did a great job in the drafting I didn't do well on the paper piecing. Frustration is putting it mildly. I just wanted to scream. I didn't I put my frustration into cutting thousands of 1.5" squares instead.
The next idea was to get the "Blazing Star" die for my Accuquilt. So I did. (Actually I think it was a gift from my mom). Here is the block that the die will make. It's not as intense of a star as the Judy Martin pattern is but I'm going to give it a try & see how things go. 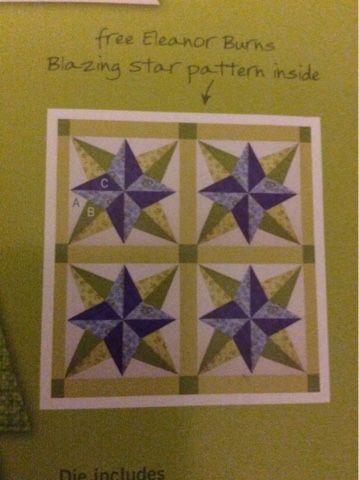 I really want to complete this quilt because Liz has been extremely patient & I want her to have her quilt!
I hope that y'all are doing well. It is very cold here in KS & we even have snow! That makes me happy!
More later on,
Vicky
Posted by Unknown at 4:41 PM 1 comment:

The first day of a new year!

2015 was definetley a roller coaster year. There were many highs & just as many lows. I'm looking forward to 2016 & all of the adventures it will bring.
I've been doing my best to sew as much as possible during the holidays but it's been pretty much hit or miss. Some days I don't get any sewing in & there are others that I can get quite a few hours in. Since I've last posted I've finished: My Kansas Row by Row 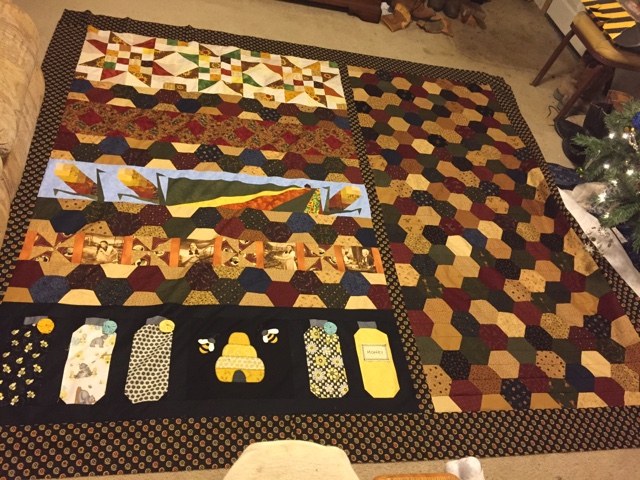 It turned out somewhat like the picture that I had in my head. I haven't quite gotten the hang of figuring out how to measure the hexagons. The hexagon panel turned out being a bit wider than anticipated but I just went with it. It's at my LAQ!
Next up was my version of Bonnie Hunters "Mad City Momma". This is the quilt that I just could not make up my mind. Well I finally did & I like the out come: 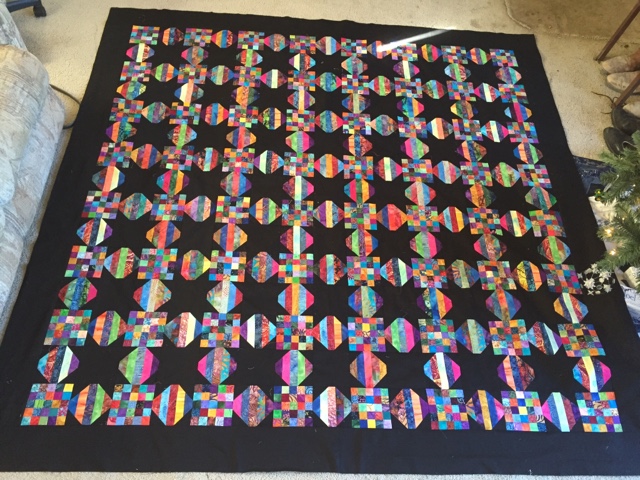 It turned out smaller than I usually make but that's ok, they all can't be Vicky size:) This is at my LAQ as well.
Now my attention is onto my Blue/White rbr. I was stumped. I had 12 rows to use & inspirations wasn't hitting. First thought was to stagger each row, use a midnight blue for the fill in section & then appliqué
Silver snowflakes in those sections. I decided not to use that idea because #1 I am not a huge fan of machine appliqué & 2 I didn't want to spend the money on a Accuquilt die that I wasn't going to use a lot. So back to the drawing board. I took out all of my rows & matched them up by how tall they were.
I had 4 rows that were 12". Great! I sewed them together for the center of my quilt. 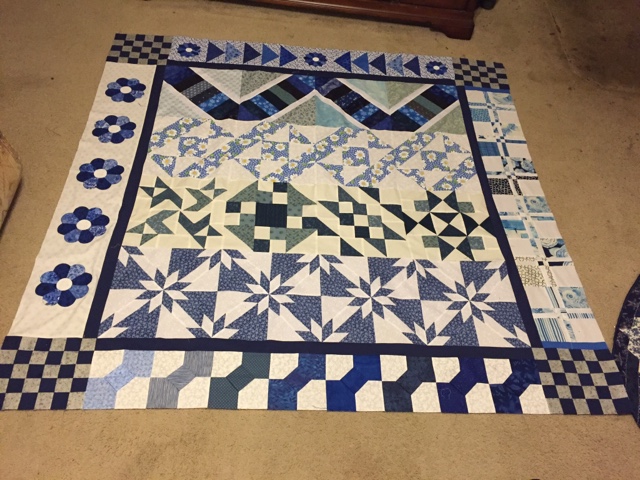 I put the blue border on then the 2 side panels/rows & then the top & bottom rows with the checker boards. I really like how this is coming along.
I was working on the bottom 2 rows when I ran out of my blue fabric that I had been using. Off to dig in the stash & see what I had. Low & behold I found something that matched! 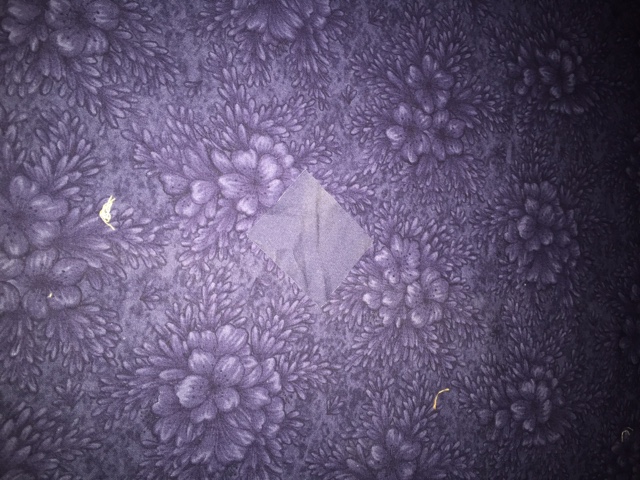 The center blue square is what I ran out of. I think it's a pretty good match. This fabric has been sitting in my stash for a long time just waiting to be used 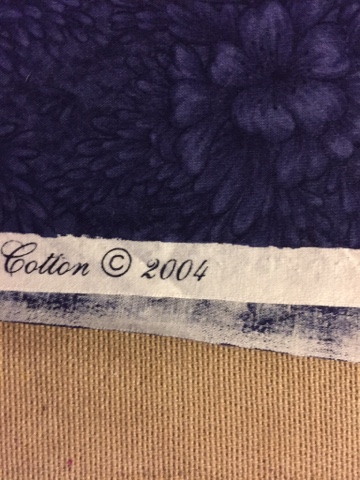 The night that I was working on this I was trying to cut just a few more strips before starting dinner. I wasn't using any of my safety rulers or attachments & I sliced a hunk off of my left index finger 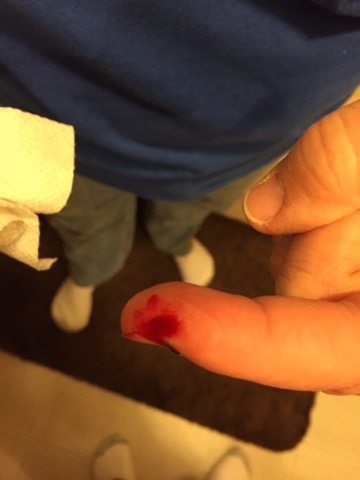 Oy Vey. I bled like a stuck hog. I was concerned that I was going to need stitches because I've done this once before & needed stitches. Not this time, this time I just sliced it clean off. I was very lucky & greatful that my husband was home to help me with it. He was a great nurse. Mental note: SLOW DOWN VICKY!
I do hope y'all are having a great New Years Day. I'm heading to meet some dear friends for lunch, might do some shopping & then I'm not sure what. More later on,
Vicky
Posted by Unknown at 8:48 AM 1 comment: