Hand quilting, it's not that bad

I had stayed away from doing hand quilting since I started quilting. I kept coming up with excuses on why I couldn't do it. I've got man hands ( which I do) there's no way I can manipulate that needle or it takes way to too long. I do have patient problems. Well this past year I had decided to bust all of those silly reasons & just jump in & give it a go. Through trial & error I found the method that works for me. I do not use a hoop. I use an embroidery needle & pearlized 8 or 12 cotton thread. This was a block I had made & I slapped a border on it, found a backing & some batting. 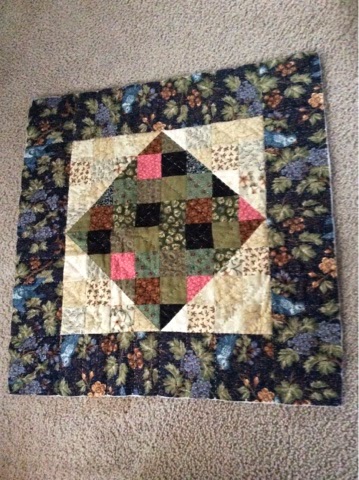 The stitches aren't perfect & that's what makes it wonderfully unique to me. 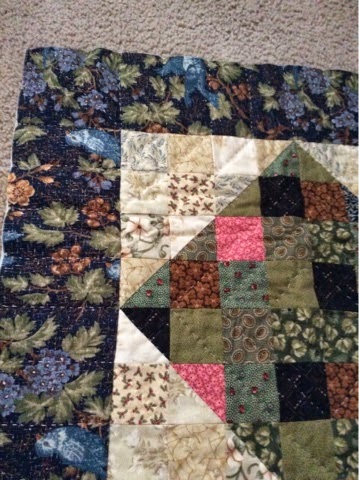 This is going to be the year for me to bust through these techs that I had always thought was too hard or not for me. I'm not going to let fear stop me from trying. I hope yall are having a great day. It's awfully windy here but it's been a good day. More later on,
Vicky
Posted by Unknown at 3:47 PM 1 comment:

Trying to decide which was is up

The last 2-3 weeks have been about survival for me. During my FILS hospital stay my world was consumed with his care, taking care of my MIL, keeping occupied/busy during the slow times & figuring out who would be at home when the kiddo gets off the bus.
We've hit the one week at home Anniversary & it's been a rough week, though it has gotten better as the week has gone on. I've been sleeping at my in laws because he has needed me but the last two nights they've done well & haven't needed me. So tonight I'm going to be sleeping at home ( our houses are 60' apart so I'm not that far away) & I'm hoping all goes well. I spend my mornings over there so my MIL can take a nap or do whatever she needs to do & I sew while he sleeps. I was able to get the Y seams quilt done! 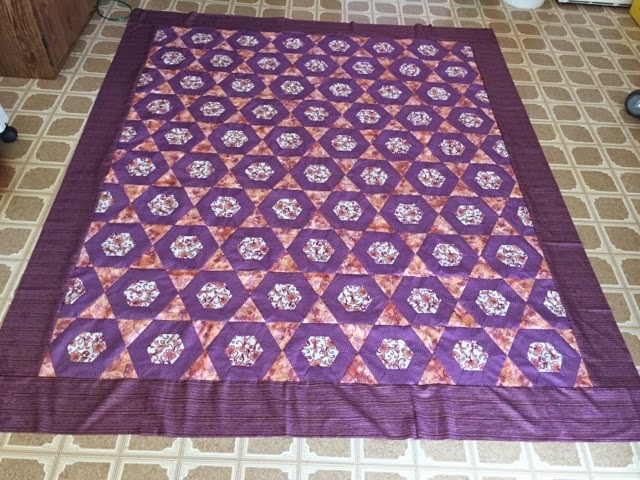 I'm thrilled that's it's done. Now I'll need to figure out how to get it to my LAQ.
Since this project was done what was I going to work on next? I grabbed a bag of scraps this am & headed over. This is what it looked like 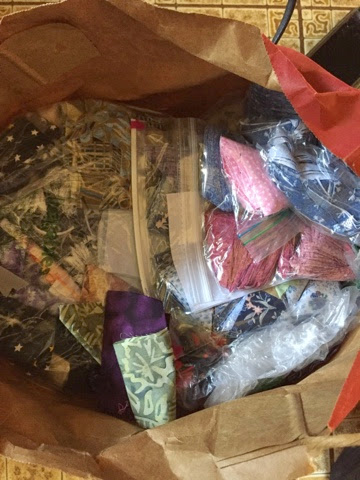 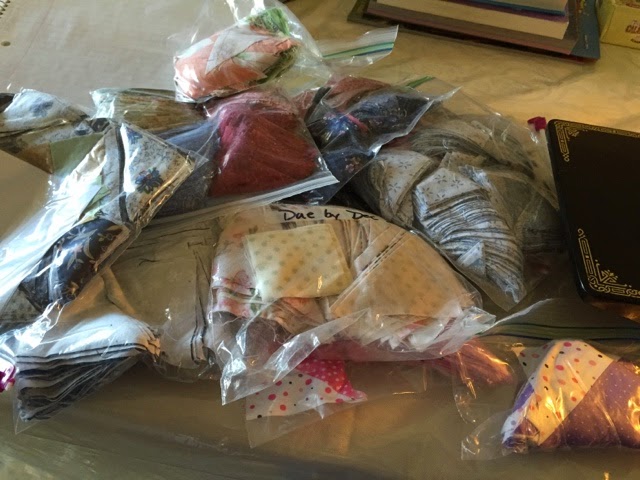 I sewed up 2 baggies & am working on getting them squared up. I was getting very excited about some quilt block ideas & then for some reason which I haven't figured out yet it's like the wind has been let out of my sails & my quilting mojo has left the building. I've pulled out my hand quilting project that needs to be finished & maybe I can work on that & get it completed. I think that the quilting mojo will come back when I start getting more sleep. I hope y'all are doing well & have a great night,
More later on
Vicky
Posted by Unknown at 7:02 PM 1 comment:

It's Monday & I'm working on a finish!

I think the end is in sight for this quilt. This is my "Y" seams project. Have I made it just like the pattern is written, nope, I've made it my own & that is ok. 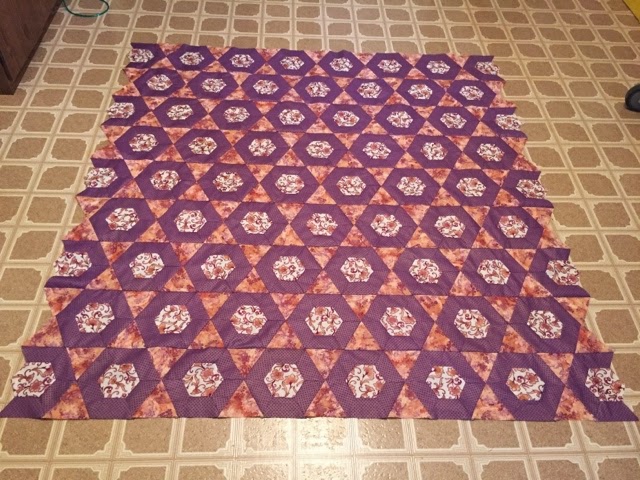 I've got one more row to put on & then it will be on to borders. It won't be as big as I generally make my quilts. I bought this yardage years ago & my chances of finding more are slim. I have completely used up all of the purple yardage that goes around the hexies. There's only itty bits left that have found their way into my string bin. I've got more yardage that goes with all of this & I'm hoping that through the borders I can use some or a lot of that up as well.
I've been doing my sewing over at my in-laws house. They are 60feet to the west of my house. My father in law come home from a week in the hospital last Tuesday & is now on hospice. My mother in law & I are his primary caregivers. We are finding our new "normal". I do know that quilting will definitely be a part of that new normal. I've set up my featherweight on their dining room table & I can look right up & see him in the living room. I believe that his generation (those born in the 20's) are extremely resilient & have an incredible will to live. I hope that y'all will bear with me as there might be time between posts. I'm going to do my best to post as often as I can. I am continueing to do my presentations. I've got 2 this week. Tomorrow night I'm with the Kansas Capital Quilters in Topeka Ks & Thursday night I'm with the Northland quilters guild in North Kansas City. If you're in the area I'd love  for you to come. I'd better cut this off. I need to get my fabric cut & head back over. I hope y'all are having a great day. More later on,
Vicky
Posted by Unknown at 9:51 AM 2 comments: