I've never been a big laber on my quilts. I think that my reasons for not labeling is that I'm not a big hand sewer, yet I love hand embroidery, go figure? I've never had much luck writing on fabric with those fabric pens & I guess the top reason is I just didn't want to do it. By the time I have the binding done I'm ready to move  on to the next quilt.
My mom had some of her mothers quilts appraised a while back & was told how important to have labels on your quilts. So for my birthday this year she gave me an incredible gift. She found a local design/t-shirt shop that would make my labels & print them on to fabric! She will write the name of the quilt & the date on for me & the biggest part is that she will hand sew them on the back! Talk about incredible, right?! 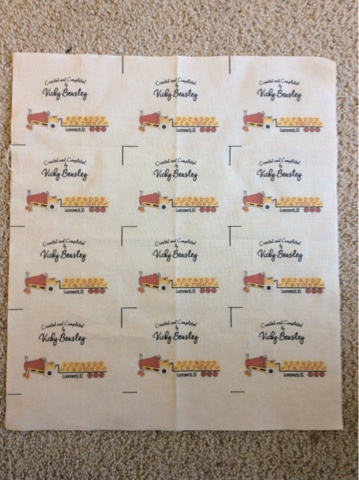 We were able to get 4 pages done yesterday but the process took a little longer than we expected. We found out that if we provided the fabric & had it cut to the size they needed our price would be much less. So off we were to find the local Jo-Anns. We found it & got our cream Kona solid. Only the problem was that Jo-Anns wouldn't allow us to cut the fabric there. We understood but then we were off to find the local quilt store to see if they would allow us to cut the fabric there. They did! WooHoo!
We took the four pieces of fabric back to the printer & had lunch at Red Robin while they did the printing. It was a fantastic long day.
My mom likes to visit quilt shops when they are on vacations. While on the west coast mom stopped in a shop in California & they had a fantastic scrap bin! She texted & asked it I'd like a bag, ummm YES PLEASE! I think that she did very well. All of this for $3!!! 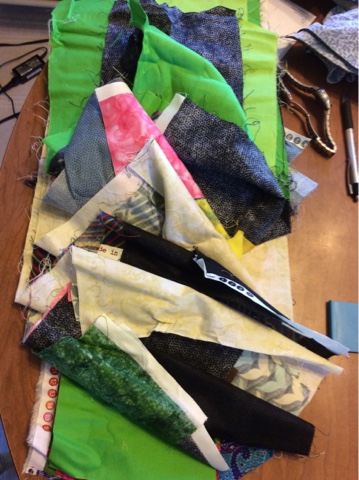 Well I should probably sort this & put it away in their proper places & get to sewing on my 2 current projects. Shhh don't tell him that I've got 2 going at once :)  I hope that y'all are having a great day. It's beautiful here in the middle of the US. I'tll be time to do chores soon & there are more blackberries to be picked. Yum! More later on,
Vicky
Posted by Unknown at 1:31 PM 1 comment:

Mother Nature can be very fickle. She can change her mind whenever she chooses. I think that meteorologists need to have the same disclaimer as doctors " that they are practicing".  They tell you in the evening that its supposed to be clear & hot the next day & you wake up to storms. In the past 18 years this is the latest we have ever been in the hayfield. I thought that last year was bad on how long it took but this year has it beat by a long shot. We're not done with our place & we have 3 more fields after we get our place done. We also have the issue of storage. Where do we put it all? The complaints and the benefits change as the weather does in farming. I'm hoping that what was mowed yesterday will be ready to bale tomorrow & there will be no storms until tomorrow night. I can always hope.
I had a very large piece of humble pie today. My longarm quilter texted that my Chess Board quilt was finished. I was excited. Well that excitement went down the drain when I saw my quilt. She had done a fantastic job quilting it but I did not do a fantastic job in piecing it. I'm not entirely sure on what went wrong. Maybe I didn't cut accurately or piece with at a scant 1/4" seam. In any case the probelm was that the body of my quilt was not square & she had to do some fudging to get it quilted. 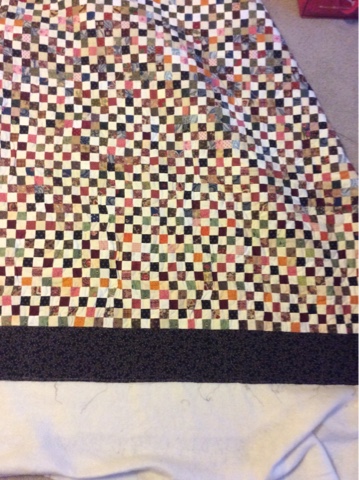 Is it a huge flaw, nope. Does it prevent the quilt form being used, nope.  Did it wound my pride, you betcha. I also need to remember what was going on in my life during the construction of this quilt & give myself a little bit of grace. What this quilt taught me though is priceless. I poured my life, the good & the bad, from the past 5 months into this quilt. There are spectacular spots of piecing & there are horrific spots as well. I guess I should rename this quilt "Humble Pie". I wouldn't trade it nor will I shy from showing it. I think that sometimes we only want to show our best & never our flaws.
Here are the quilty things that I learned:
#1 Stay on the same cutting mat & ruler that you started with. All mats & rulers are not created equal.
#2 Stay on the same machine if you are not going to test seam allowances on any different machines that you piece the same project on.
#3 When you are piecing the quilt body do your best to be accurate. This quilt is square but the quilt body is not. When I put my borders on I measured down the center of the quilt for the length & width of my borders therefore making the quilt square.
#4 Don't get into such a rush. I get so excited to be finishing such a huge project & I need to keep the same level of accuracy in the end as I do in the begining.
I hope that y'all are doing well & that you have a great night. It's time to finish supper, my fellas are starting to come inside. More later on,
Vicky
p.s.  I think that I have figured out/solved hopefully the tension issue on my Singer 301. I'm thinking that somehow the tension knobs or discs got bumped when I was taking it to Sew night with friends. I fiddled with it for quite a while & it's finally sewing ok but I have my tension knob set at 6 & that just seems high to me. I'll keep sewing with it & if it acts up again she might have to go to the shop. I'm definitely learning that whenever I want to sew away from my house to take the featherwieght. She's in a protective box.
Posted by Unknown at 7:11 PM 1 comment:

I humbly apologize for being so neglectful in my blogging. Summer always seems to be such a busy time. You'd think that I'd have lots of time for sewing & blogging since we haven't been in the fields making hay because of rain. This funny meme pretty much sums it up here. 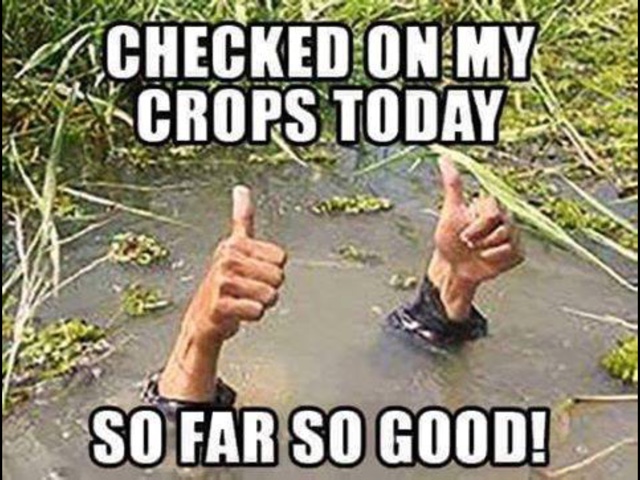 The amount of rain that we have recieved this year is amazing. Just 3 years ago we were in a severe drought &  there wasn't much hay to make. I guess it's encouraging that if you just wait a bit your circumstances just might change.
I am the VP at my local guild (aka; program chair) & we had our first workshop with me as VP two weeks ago. We had a good time & the instructor, Jenifer Dick of 42quilts.com was wonderful. The quilt we were working on was called "Exploding Nine Patch". I was all excited thinking that I could make it scrapppy & use what I had. This was my first block that I tried 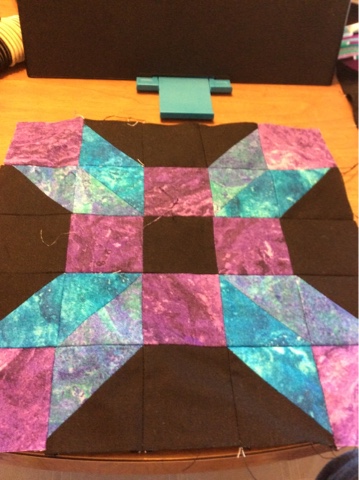 It's a pretty block but it didn't have the 3D effect that the pattern showed. AHHHHHH! I was frustrated. Yes I could have continued but it wasn't what I wanted or expected so I had to shop for yardage. Yup the Scrappy Farmer bought yardage, mercy that was rough. I was seriously out of my element but I needed fabric that would work so that I could make some of the project in class. This is what I came up with. 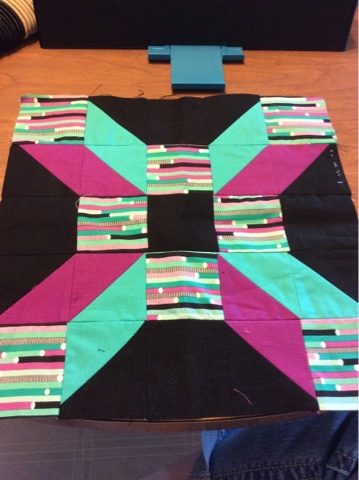 I was able to use the same black from the first block & just find 3 more fabrics. Now I was cookin' with gas. I was getting that 3D look. Also I should mention that the blocks in the pattern are 20", mine are 10". I just couldn't go that big, small is what I like. I was able to finish this block in class & that made me feel a little better. Last Friday I was sewing with some friends & decided to work on this project .My new 301A started skipping stitches & making lots of loops on the back, the frustration started to build. So the solution is use one of the floor models ( my sewing group meets at the local quilt shop). Nope that wasn't going to work either that machine was jinxed as well. I knew when to call it quits & go home.  I haven't fiddled with the 301A since then but I"m hoping that whatever ails her it'll be an easy fix.
So last Saturday was my birthday & I wanted to sew but I didn't want to work on the yardage project, I wanted scraps! I got out my new Winding Ways die & started cranking fabric through & sat down at my treadle. It had been a while since I've sat down at that machine.  It didn't take long before I was in my element. I've made a little progress so far. I'm really enjoying making these blocks & will definetly make them again in another color way. 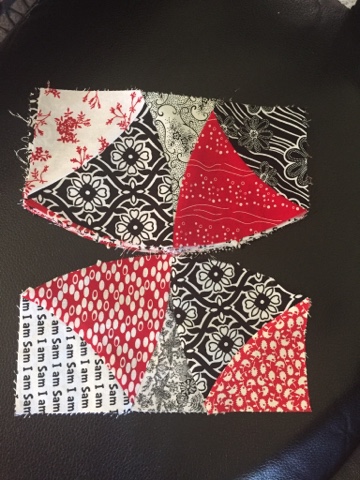 I guess I'd better quit yackin' and get some sewing in while I have a chance. Husband has a 3am wake up call for work tomorrow, man that's early. I hope that y'all are doing well.  More later on,
Vicky
Posted by Unknown at 6:11 PM 1 comment: